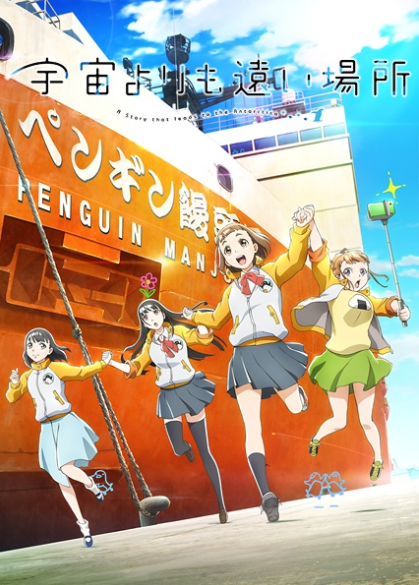 if you’re looking for a series with charm and a soft warmth, i definitely recommend a place further than the universe. after seeing rave reviews about it, i decided to give it a shot. at first i was skeptical. as per usual, the main character was a typical ditzy high school girl just trying to do something interesting in her life. she was almost too reminiscent of yui from k-on!  i was worried, also, because i thought it suffered from the japanese habit of making every series about high school girls. i think a lot of anime fall trap to this- where they take serious subjects and “moe” it so that they can attract a larger fan base. however, as the series progressed and you saw how the characters developed with the main plot, it was clear to see this wasn’t just another pull to the perverts looking for a moe plot. there weren’t any cheap panty shots or any tricks to make for “plot.” i really appreciated that. the characters developed pretty well in just a short 13 episode run, though i wish we had more time to see them grow more three dimensional.

madhouse has produced many classics, and has done pretty well with the series it has released recently, so i was hoping that this would deliver the way madhouse usually does. i really fell in love with the series and in just a few short episodes, i was attached to the characters and their own specific struggles. i would be lying if i said i didn’t produce a tear or two after watching this series. there were some darker aspects of the story that i think they took too lightly to keep the show more light-hearted, and i personally wish they had expanded more on them. my other largest qualm with this series is that the parents were not very involved. antarctica is a very dangerous place, and the idea of parents letting their children go there all willy-nilly seems far fetched and unrealistic to me. it was even more ridiculous to me knowing that someone had been lost in the expedition prior – no parent would be willing to let their kids go out there knowing a professional died. i realize that in most anime, parents are very hands-off, but this seemed a little too outrageous.

the artwork was stunning and i think they did an amazing job capturing the scenery in a mostly “bland” location. it’s hard to make an endless landscape of snow seem beautiful, but they truly took advantage of what antarctica had to offer, especially with the aurora. the soundtrack was good, too, but i wasn’t a fan of how they cut the opening song.

overall this anime scores a 8/10 for me, i have my reservations, but the qualities were strong enough that it outweighed the few issues i had with it. sometimes you have to take things as they are, and roll with it.

what was your favorite part of this series?

Spooky season off to a great start 🎃👻✨
Spooky season is here ✨
Chilly weather means more snuggles.
Just realized I didn’t have any cream cheese while I was there 🥲
In some ways this feels like yesterday, in other ways I feel like there hasn’t been a day where I wasn’t your wife. Each day I love you more and can’t believe God gave you to me. Happy first anniversary ❤️
New part time job feels a lot like magic ✨
Every time I upgrade, the car gets bigger 👀
The lack of jellyfish emoji makes me sad 🪸