Skip to content
Kathleen Jo a day in the life December 3, 2019

the end of much ado meant finally some sleep! the week after was a big blur because not only was i trying to recover, it was also time to prep for thanksgiving!

i am usually very strict about pets on the bed, but since leah had just gotten a bath and i was lonely, i let leah snuggle with me on a much needed day off. it’s almost scary how much she’s grown on me – especially since i’m not a dog person. it’s not that i don’t like dogs, it’s just i’m truly a cat person at heart.

now that i don’t have rehearsals every night after work, tony and i took a long overdue trip to homegoods, one of our all time favorite stores. they had this giant teddy bear on sale, and i wanted a picture with it for scale – it’s huge! i guess i shouldn’t be surprised that it was two hundred dollars, but for some reason that was much more than i expected.

thanksgiving was especially somber this year. my sister-in-law lost her younger brother in a car accident just two days before. it was really abrupt and so my brother and their family couldn’t come to thanksgiving as there was a lot to take care of from the tragedy. i’d only spent very minimal time with ryan, but i’d known him since i was a little girl – we met when our siblings had started dating. he was really kind and personable. our whole family felt the weight as we’d all known him from joint family gatherings. in light of the loss, we were a lot more subdued this year during dinner, but we also were able to remember how thankful we are for each other. it’s a shame that such sad things can bring people closer – i suppose that’s the human condition.

once thanksgiving was over, i had to get to work hemming my dress for pageant. if you recall, i went last year to enjoy reliving my glory days in job’s daughters. i bought this gorgeous dress from lilly pulitzer, but the problem was most people are much taller than me so i had to take some time to hem it. i ended up cutting off eight inches from the dress, but in the end i was really proud of my work – i’ve really gotten the hang of using my sewing machine.

as an extra fun pit stop on the way to williamsburg, tony and i visited my brother in richmond both on the way there and on the way back. we got to enjoy his amazing cooking and some yummy richmond restaurants. i was really happy to spend time with my brother and my nieces. it’s been lonely since he moved away so i’m glad it’s only a two hour drive to go see him. finally we arrived in williamsburg with enough time to get ready for the main event. it was so nice seeing everyone and getting to see who was next in line to wear the crown. tony also had a lot of fun watching the pageant and all of my jobie sisters loved him! reuniting with loved ones really made the night special.

as emotional as ever, passing the crown down the line was a really wonderful moment. it’s crazy how each year i get further and further away from the newest miss. 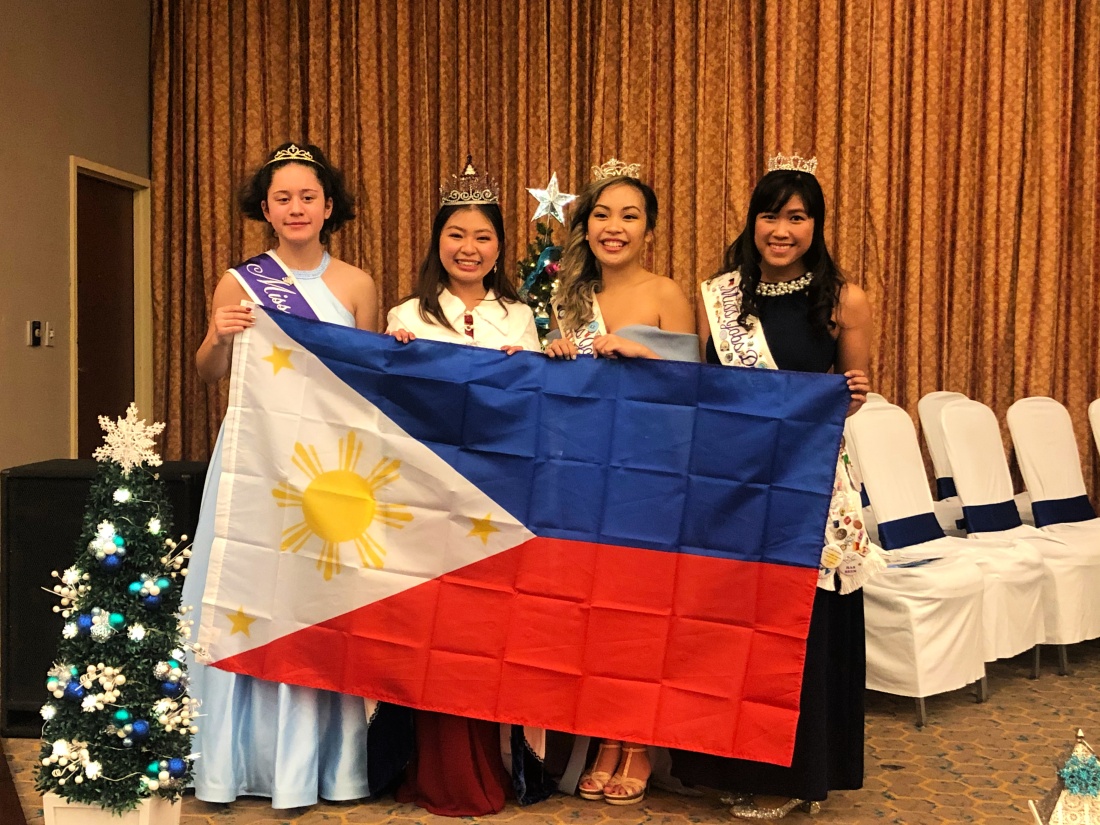 probably one of the coolest parts of the event was meeting the miss international job’s daughter; she’s the first one from the philippines since 1996. she was absolutely charming and we realized that we might be cousins since we share a last name. we became fast friends, she reminds me so much of one of my very closest friends, mikee, who was the miss of the philippines a few years back. i’m glad i got to meet her!

and so pageant went off without a hitch! i’m glad i was able to go and that tony was so patient and graciously took a million-and-a-half pictures of me with everyone. sharing it with him made me feel like we got even closer. this upcoming weekend i’m judging for miss delmar job’s daughter pageant, so i’m excited to wear my sash and crown again.

we arrived back yesterday and honestly i’m still quite tired from all the driving. it was a crazy eventful week, but i’m glad life is settling down again. i’m hoping that this is an indication of how december will go – though we never can be too sure. i’m hoping to get you updated on my goals soon, too.

winter’s on the way so stay warm out there! Xx

2 thoughts on “a somber thanks”