overwhelming. that’s how i’d describe this month so far. work has picked up at an immense speed, i’ve had rehearsals every night, and the weekends have been filled with volleyball, plans, and an attempt to relax with tony. with all this going on, i’m painfully behind in all my blog posts – i tried to get more time sensitive ones out before long, and now my weekly ones have suffered!

the positive is that because i’ve been so busy, there hasn’t been all that much to catch you up on.

the fourth of july was as fun as it is every year. my family decided to switch things up and have boodle fight instead of grilling this year. it was delicious, but since i’ve been losing weight, my appetite isn’t what it used to be. i ate as much as i could but wasn’t able to clear out much – everything was just so delicious!

the fourth of july is probably my second favorite holiday behind halloween. i absolutely love fireworks! every year my family gets together at my brother’s house. we eat, hang out, and then light off fire works. it’s so enchanting and beautiful. there were a lot of good ones this year. one of the best parts is that in the horizon, you can see the fireworks from all the nearby towns. one year when i have a super camera, i’ll have to take a picture to show you what i mean. 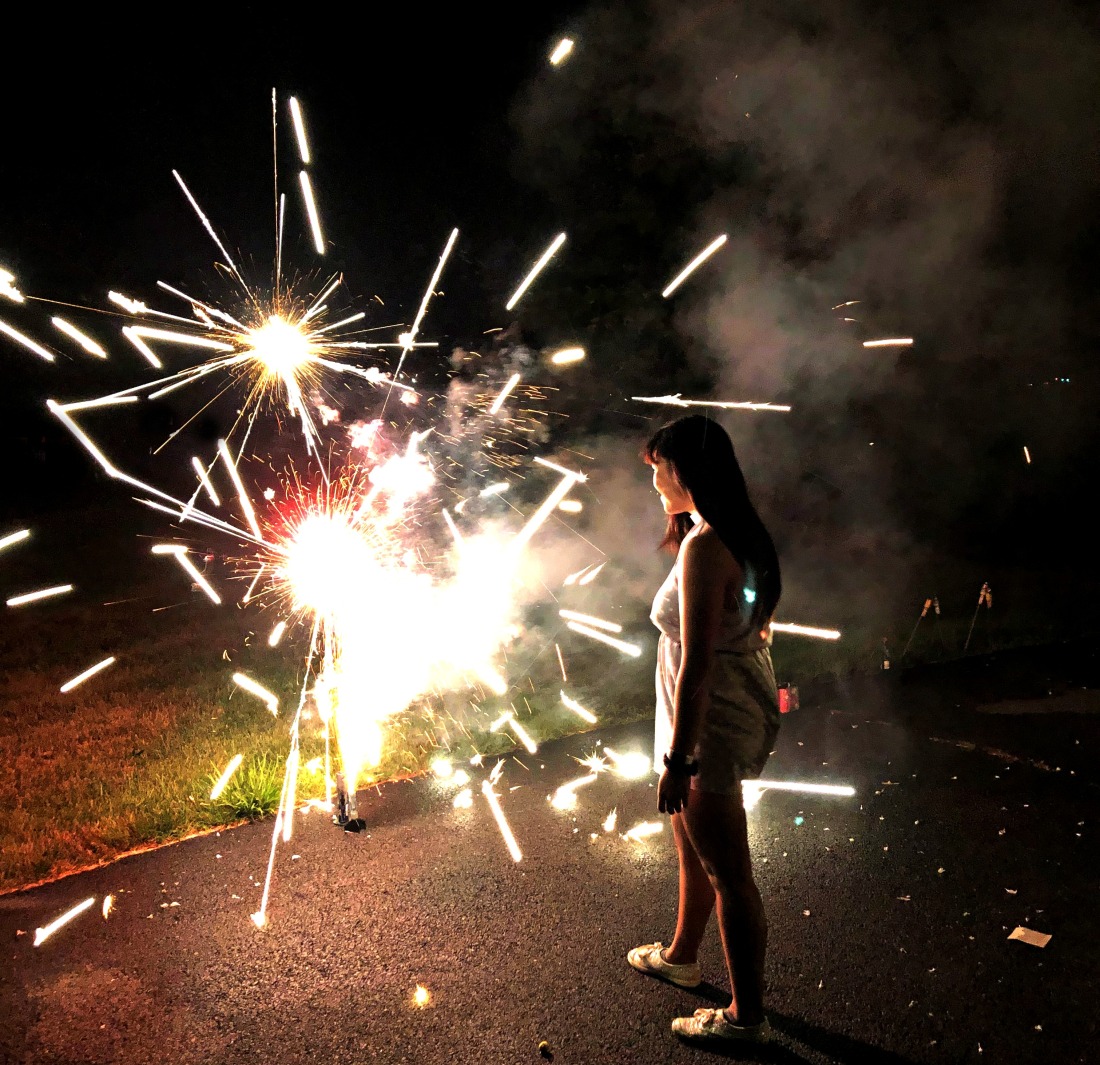 during the fireworks, my brother plays the stereotypical patriotic music and we all just run around and enjoy the lights and sparklers. since it’s so consistent every year, somehow it feels like home. i love it. this picture that tony captured is my favorite! i feel like i was casting a spell. 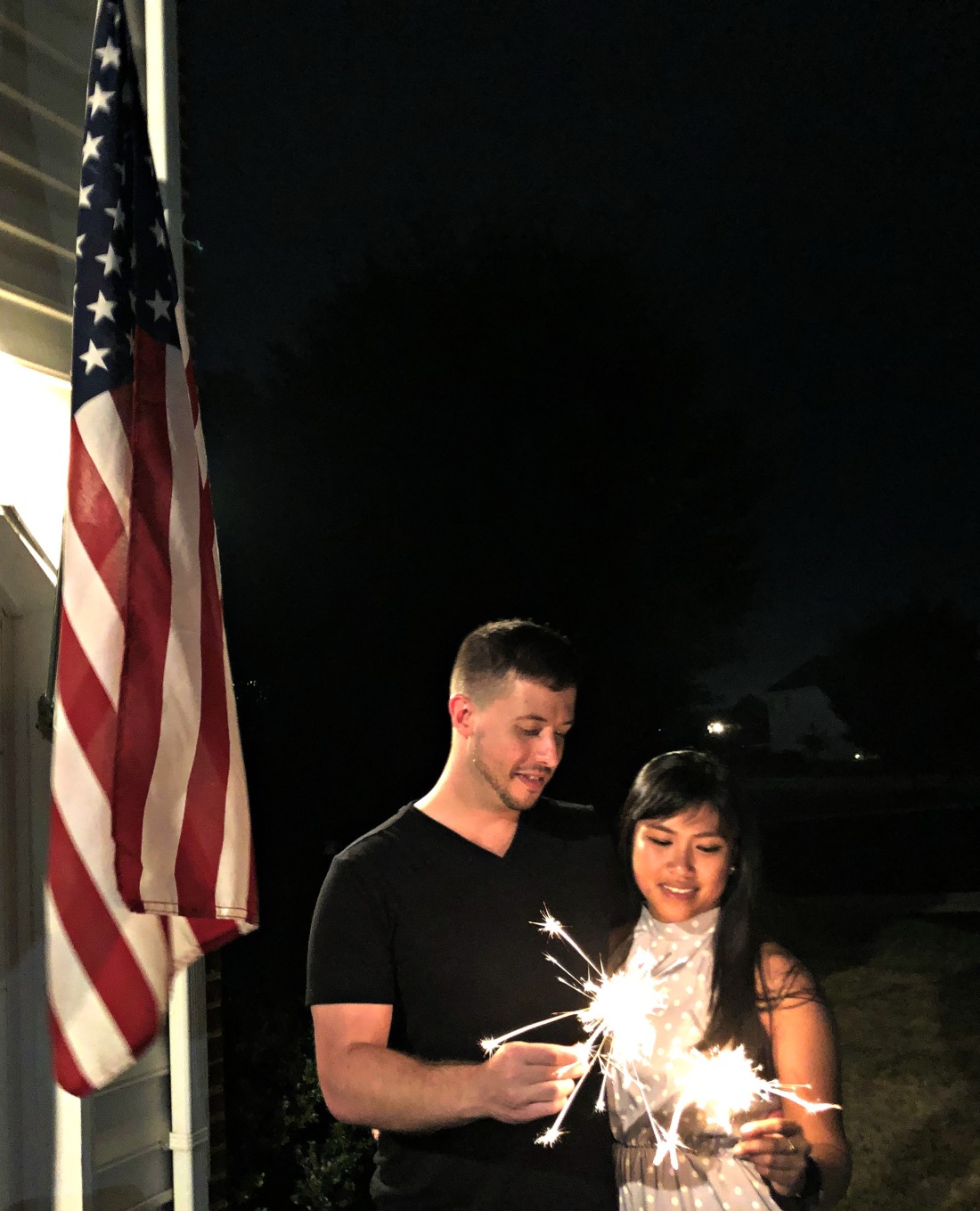 of course what would i be without a sparkler picture? our first fourth of july together, and i hope for many more.

unfortunately, july brought with it an intense heatwave. it’s been unbearably hot and humid lately. some days, you walk outside and it feels like you’re at an indoor pool – the stickiness is just horrible! the flora has been, understandably so, thriving better than ever in the humidity. there have been a lot of beautiful summer flowers blooming outside.

as if gluttons for punishment, tony and i decided to have our weekly bagel cafe outside. luckily we found a shady spot, but the heat exhaustion made me fall asleep on his shoulder once we finished eating. i wonder if i’ll ever get tired of my toasted everything  with strawberry cream cheese.

leta and i finally went to the farmer’s market again. we haven’t gone since it closed for the winter, and i was excited to take the walk together. the scenery is always so beautiful, and it’s fun to look around the market, enjoy a cup of ice cream, and just spend time with my best friend. after the walk back though, i was drenched in sweat and leta had to give me ice water and and an ice pack. i guess i’ll always be sensitive to the heat!

ashlee was in town this past weekend – which is alway such a treat! she, cammy, and i had a fun little mall date. i’ve been friends with these two for so long, they get my humor and sarcasm, so it’s really refreshing to just be myself and joke the way i always do. they’re such amazing friends and i can’t imagine life without them.

i had a few other adventures in the past two weeks, but lately i’ve been so busy living my life i’ve forgotten to take pictures. i’ll do my best to be better for you! anyways, i hope you have a lovely rest of the week ahead. i’m taking a staycation next week, so i’m going to also take a break from my blog then. but i’ll try to squeeze in one more post before then. ❤

Happy Mother’s Day 🌸 Thanks for your love through all these years. #mothersday
Memory Gap Megan