over the weekend, as i mentioned in my weekly blog post, i was beyond lucky to get to tour a beautiful pre-civil war home. my friend’s father owns this house, and it was rich with history. i couldn’t believe how gorgeous it was when we arrived, and i only became more enamored when we went inside. 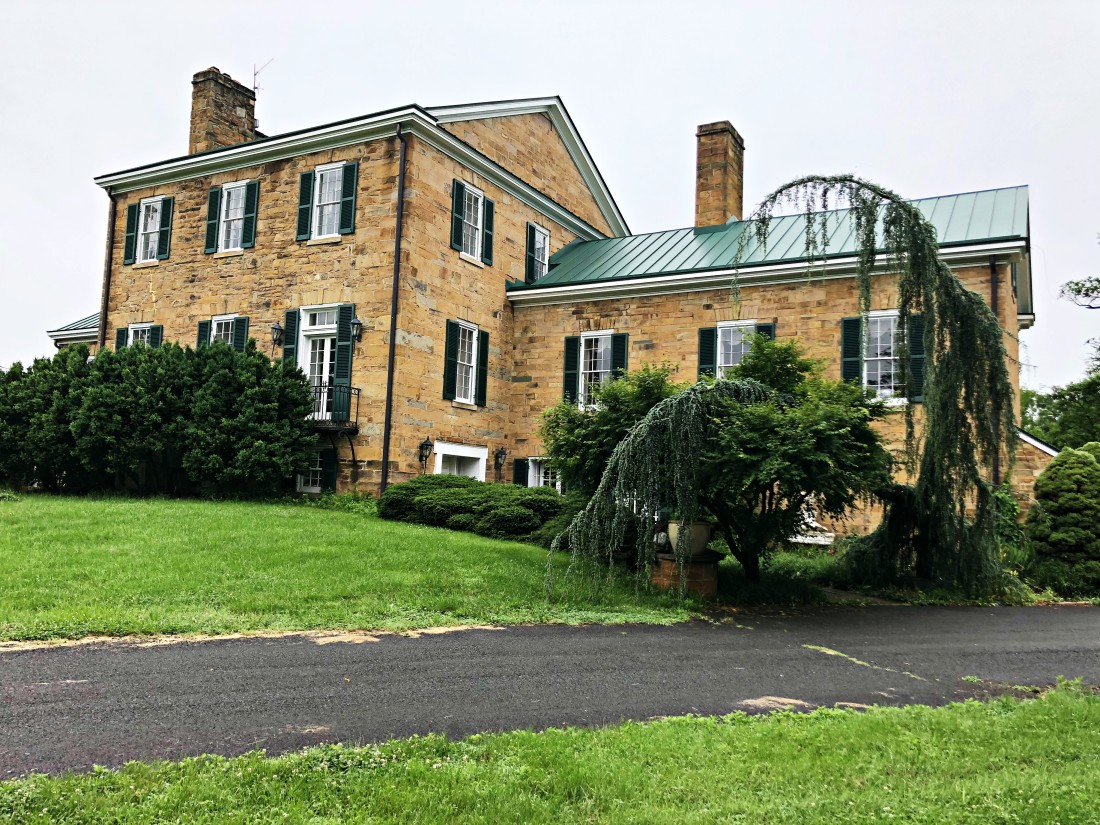 the house was built in three sections, the first portion, peeking slightly through on the left side was built in 1799. though small, it was the beginning of a true masterpiece. the center section with the very worn chimney was built in 1840, and became the main part of the house. the french doors and the little balcony were the main entrance at that time, with a staircase going up. last, but certainly not least, was the final section on the right, built in 1952. this last edition includes the modern kitchen, the two floor master suite, and a garage. 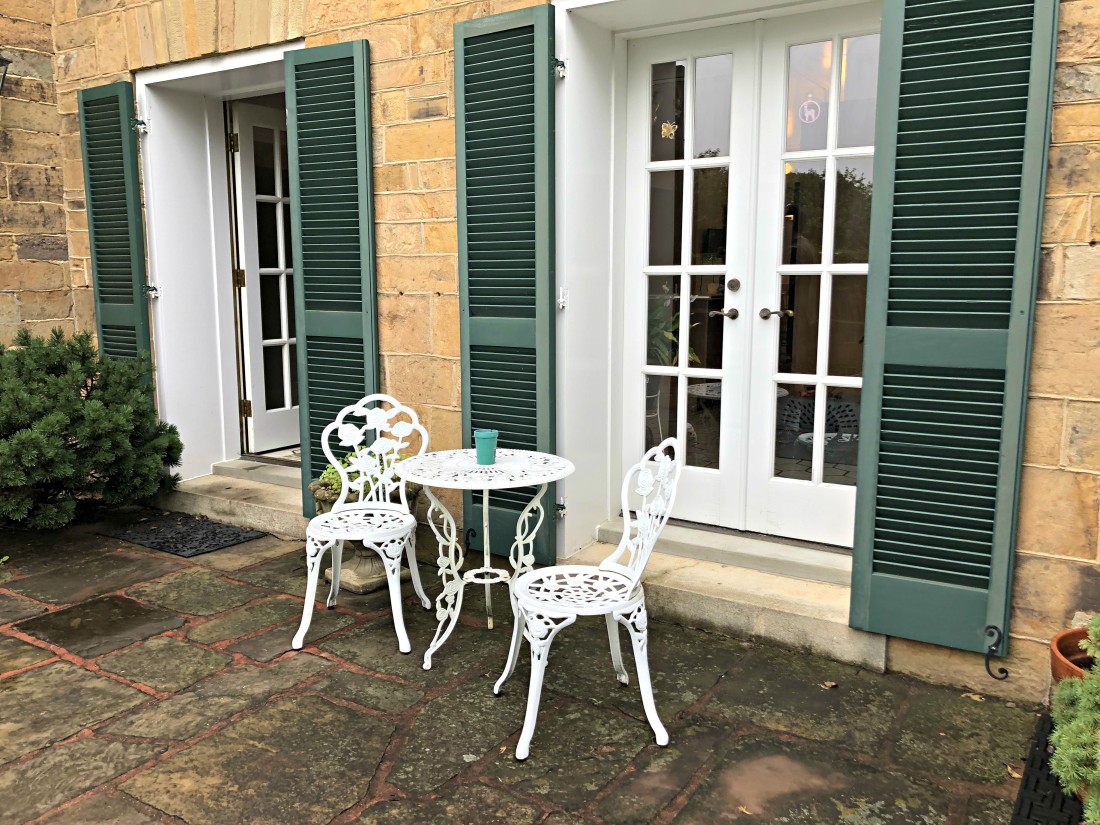 as we came to the current entrance of the house, we were greeted by these cute little patio pieces. i’ve always loved dainty metal for patio furniture. the look is so parisian and makes me think of a warm summer afternoon sipping tea in soft sunlight. 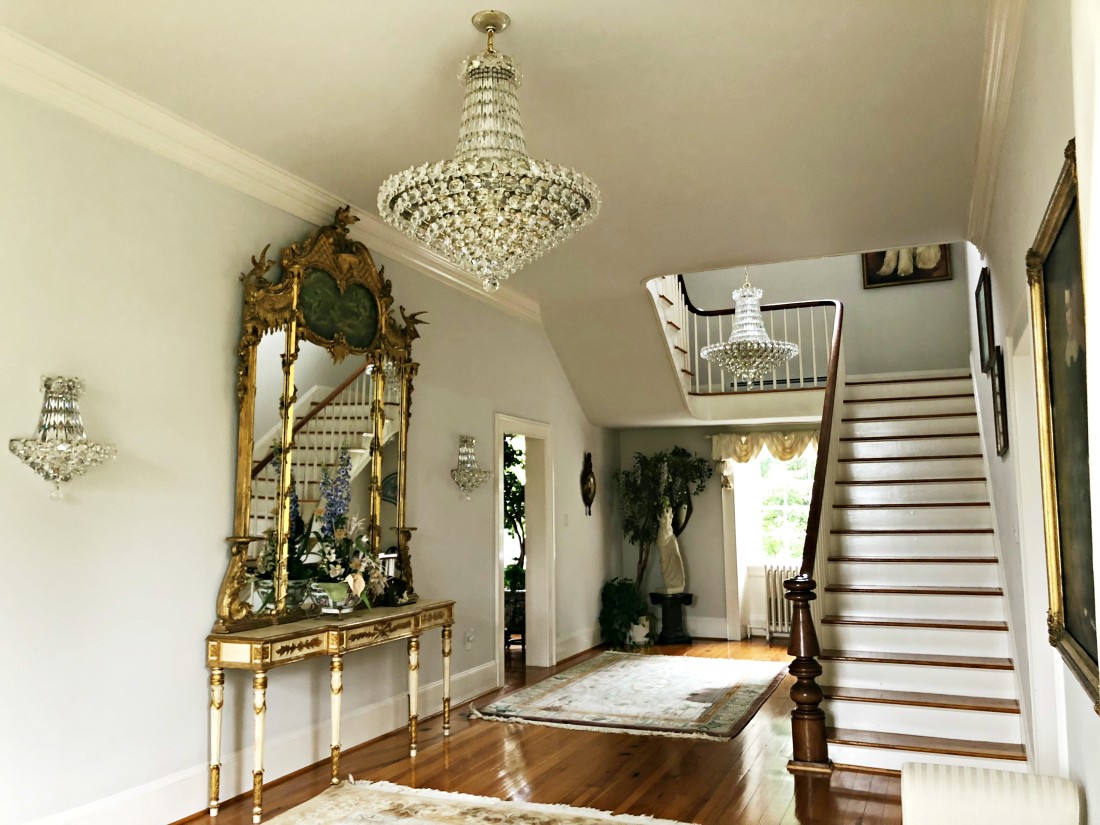 the main hall was breath-taking. the exterior was more simple and modest so i didn’t expect the inside to be so grand. baroque furniture was placed expertly through the house adding classy touches to all rooms. this table with the mirror really struck me. each room is lit with beautiful chandelier. 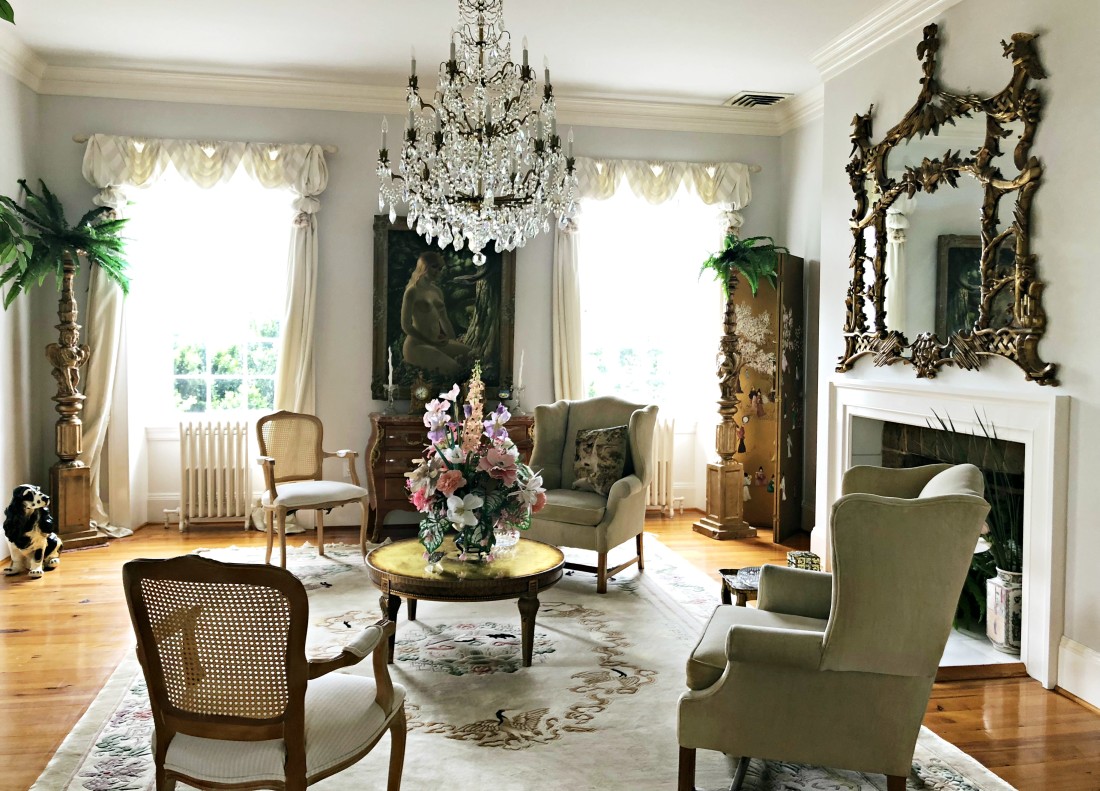 the first sitting room we came upon was, as you can see, gorgeous. i’ve never really wanted a rug before, but now after seeing this one, i felt that i’ve been missing out my whole life. the art painting is more recent, re-framed in an older wood frame to match the rest of the room. there was a touch of the family’s travels throughout the room, including an oriental dividing panel in the corner. 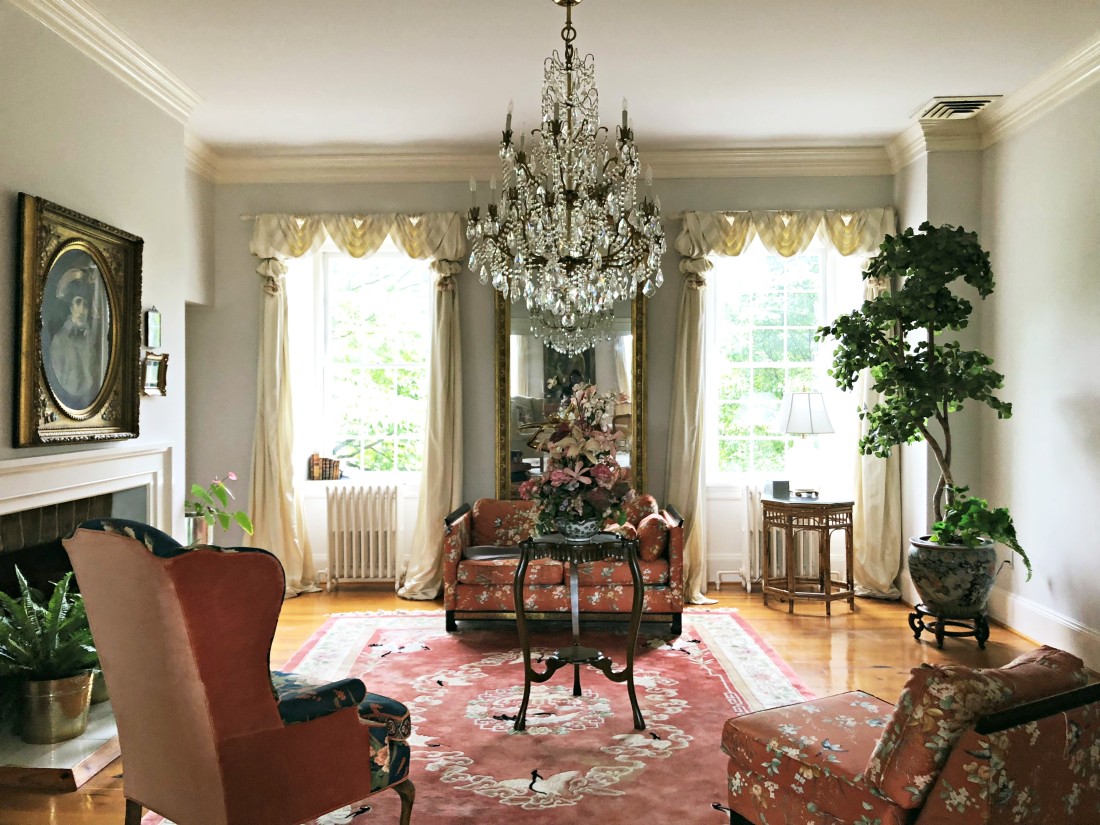 the second sitting room had a different theme to it, but was just as striking as the last. the lighting from the windows really brightened the room, even though it was rainy and gloomy outside. i was especially in love with the little potted tree in the corner, and the large mirror that fit like a glove right between the windows.

the first bedroom we came upon was a guest bedroom decorated in oriental patterns and decorations. it had a darker tone to it, which i felt made it more elegant. 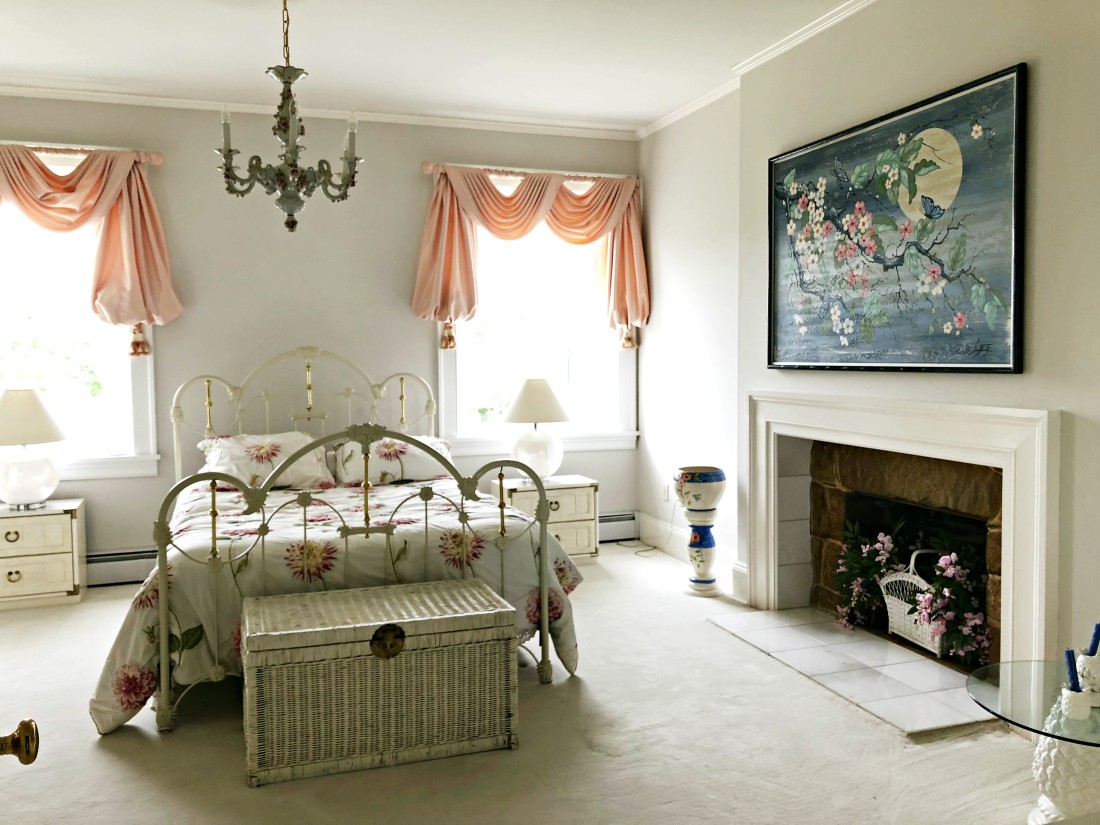 the second bedroom was brighter, with more white traditional finishes. it struck me as a room that i would have liked to have as a little girl. i really loved the bed frame in particular. 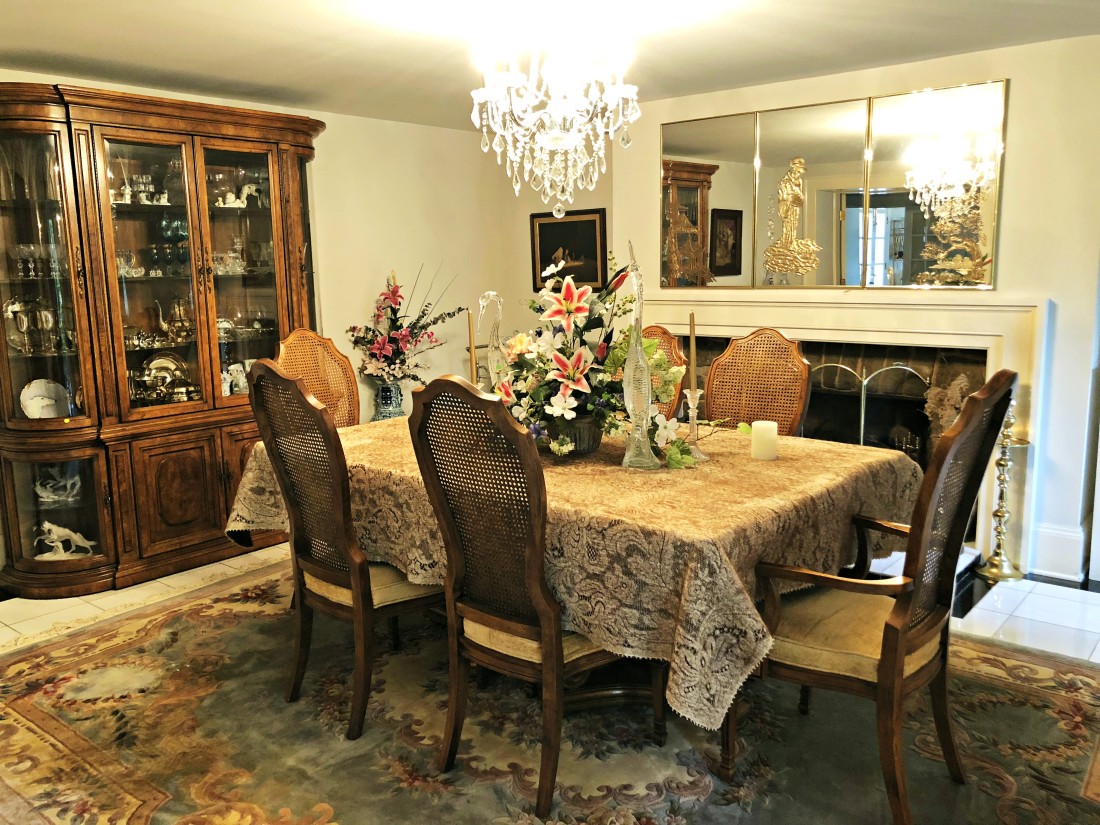 after seeing a few empty rooms, we came down to the dining room, which had beautiful dishware in the hutch, and a delicate lace tablecloth. the wood was old and treated well, so it held out that beautiful aged look. this room was not as well lit, being on the lower floors, so we turned on the light to get a better view. 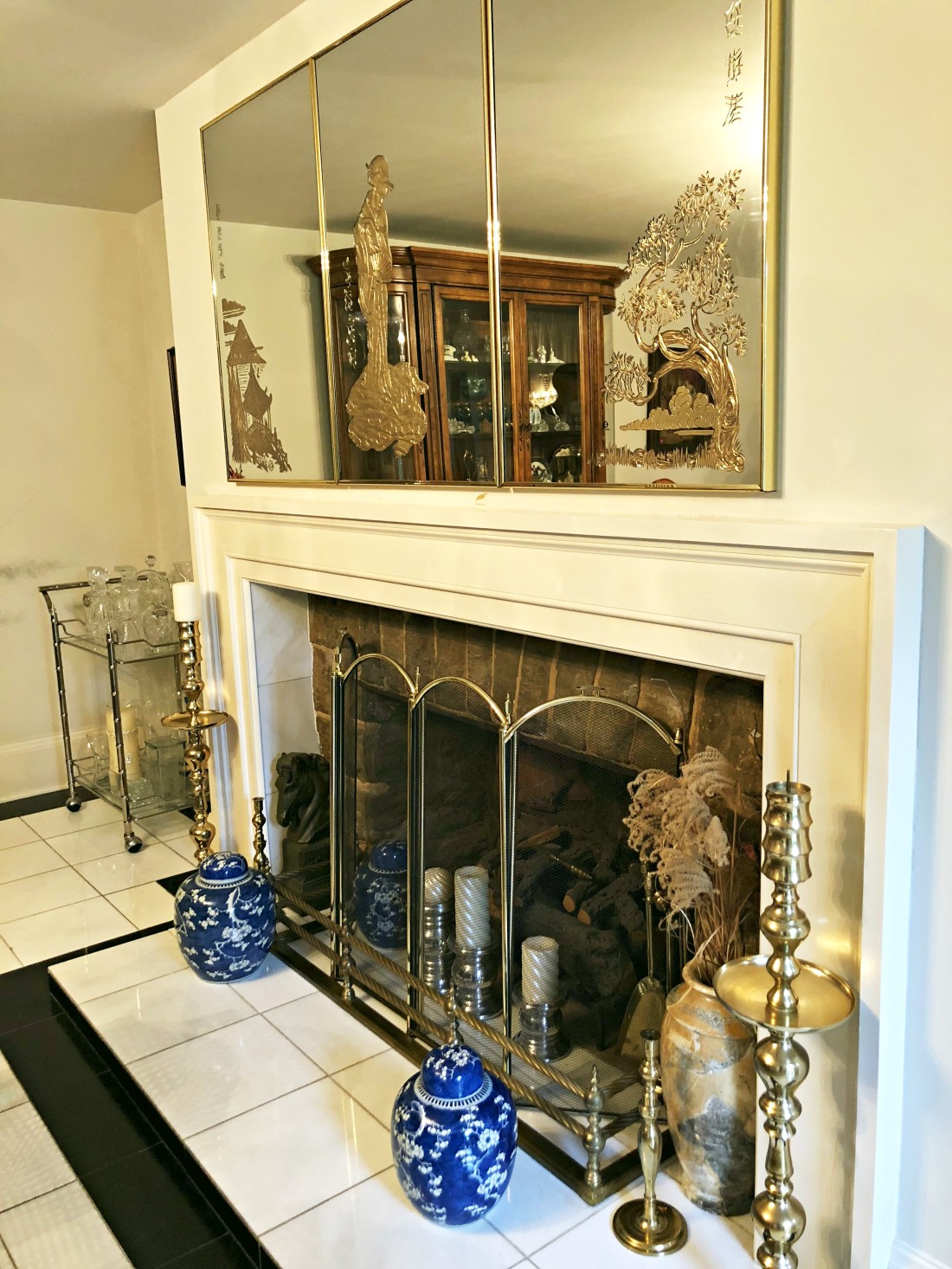 some more oriental pieces decorated this room around the fireplace. the traditional japanese pottery really added a pop of color to the mostly gold tones of the fireplace. 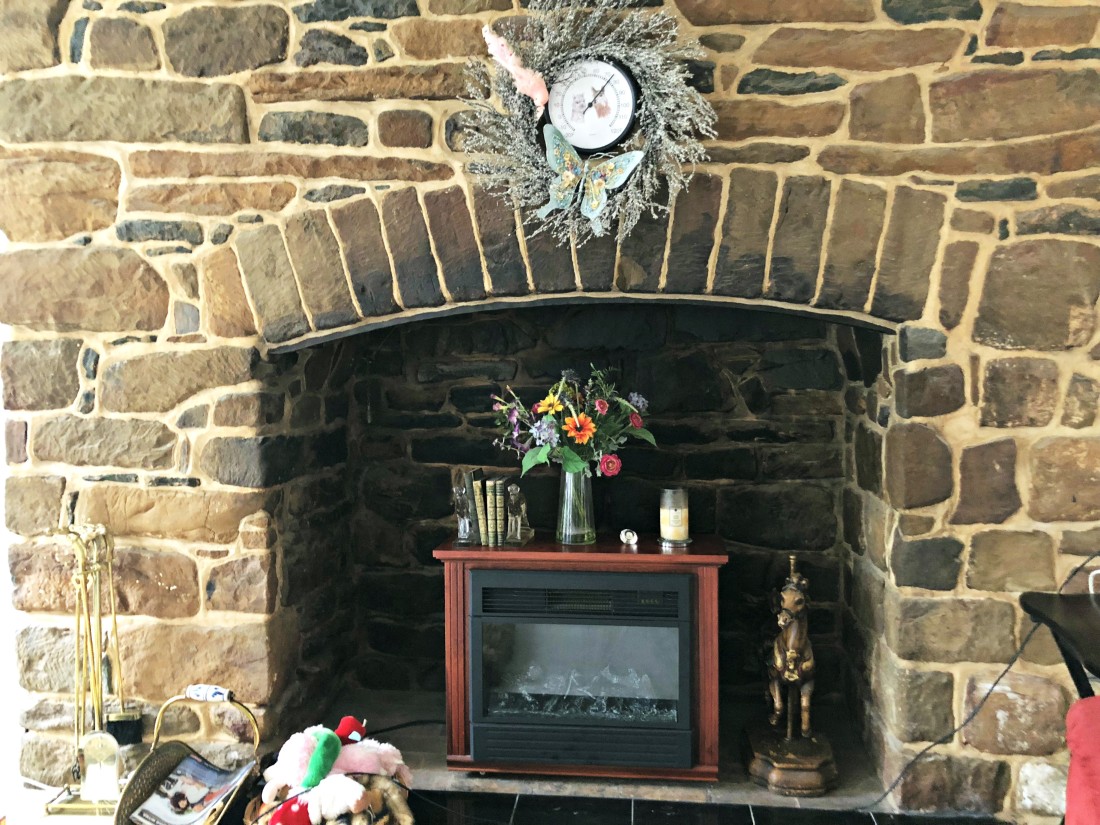 we continued on to the older part of the house, which had the original fireplace that they used to cook their meals in. now wood burning is a lot of work, so the current owners opted for a tiny electric fireplace to put inside. i was really impressed that almost every room had its own little fireplace. the inner workings of the flue must have been difficult to set up at first, but the result was absolutely charming. 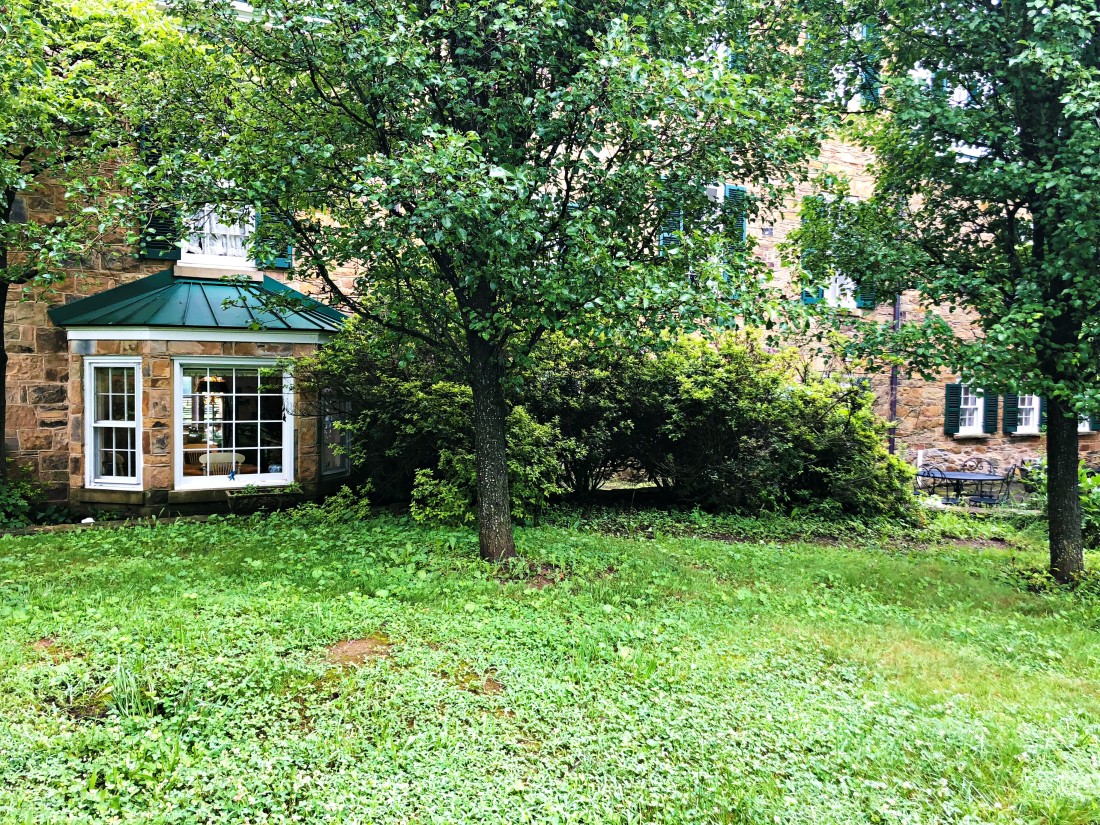 once we had our fill of the inside, we wandered outside to get a look at the full exterior. i’m in love with bay windows, so this was especially beautiful to me. they were able to keep the house completely uniform in look despite being built over a two hundred year period by always sourcing the rock from the same quarry. the stones match perfectly, and the additions were not obvious. 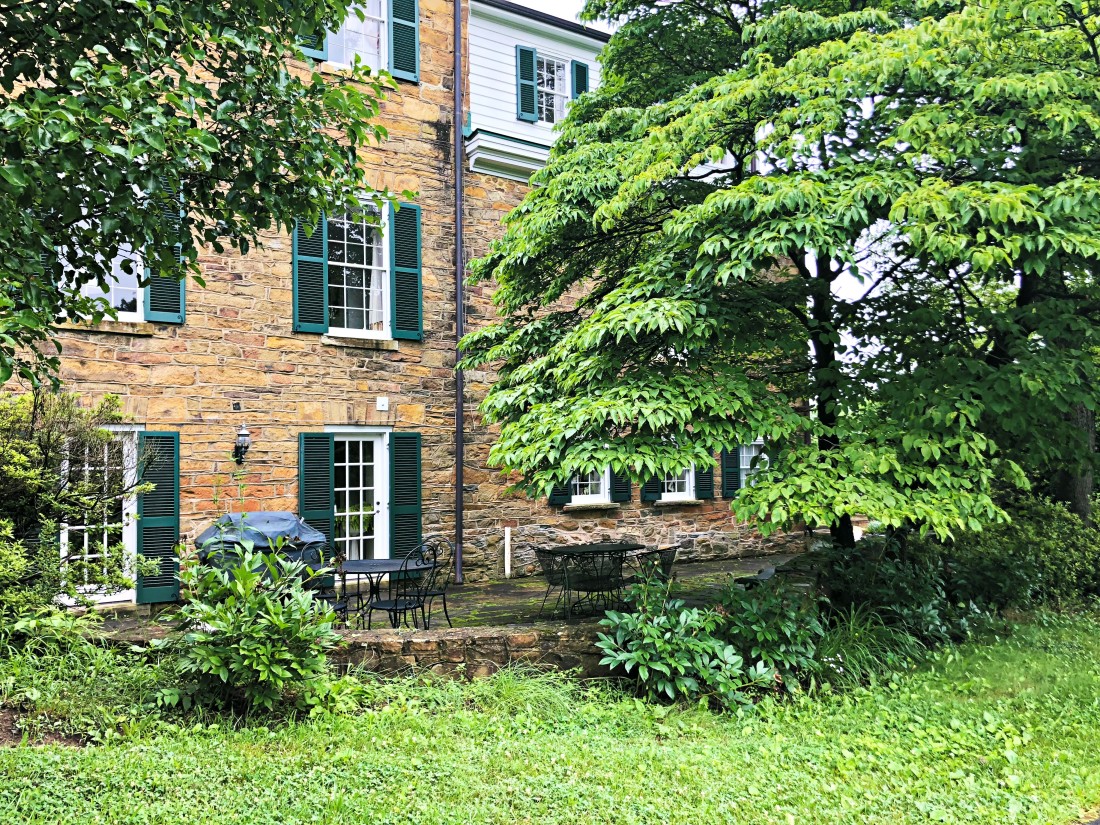 what was really interesting to me was that all the way around the house, the walls were three feet thick. we came upon a little patio area in the back, and i was greeted by more of the metal patio furniture i love so much. 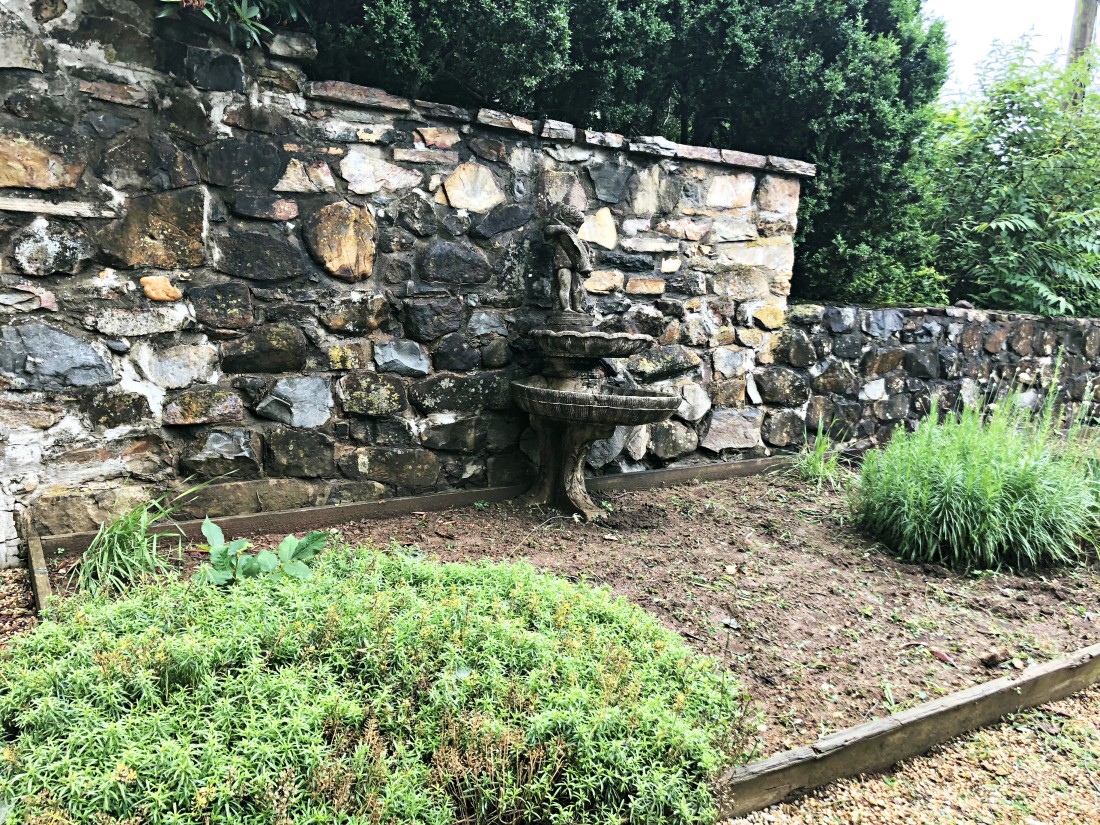 as we passed to the side of the house, we stumbled upon a garden with stone walls and fountains. because the stone hadn’t been cleaned in a while, it felt like we discovered a mysterious abandoned area, that had long been forgotten. it made me think of the book the secret garden, and it added to the mystical feeling of the place. 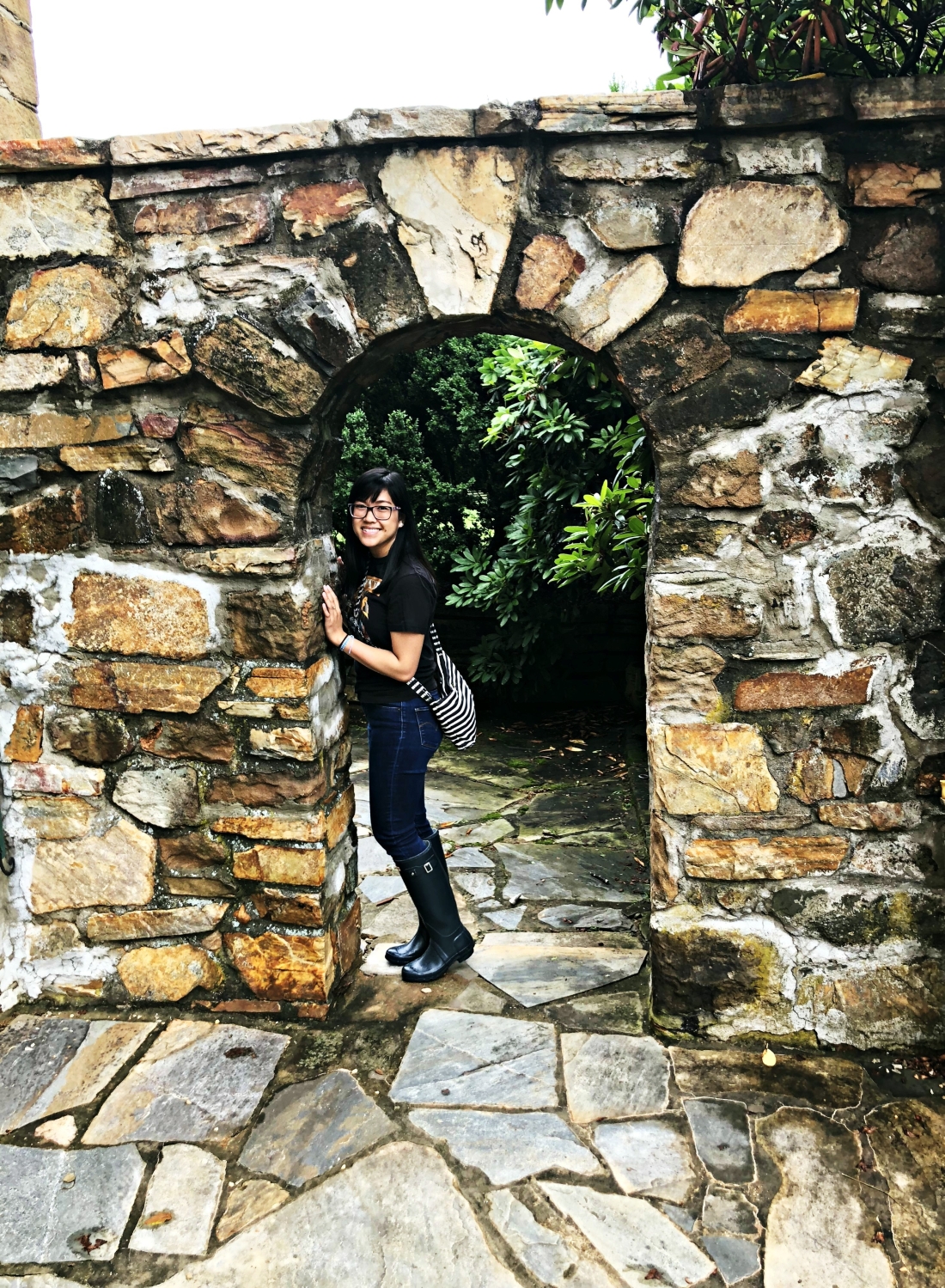 to the left of the fountain and garden area was a small archway. in a way, i was able to step into a little portal to a different time, experiencing the magic of centuries ago. i love archways, there’s always been a charm to them – so simple, yet that simplicity begets such beauty. 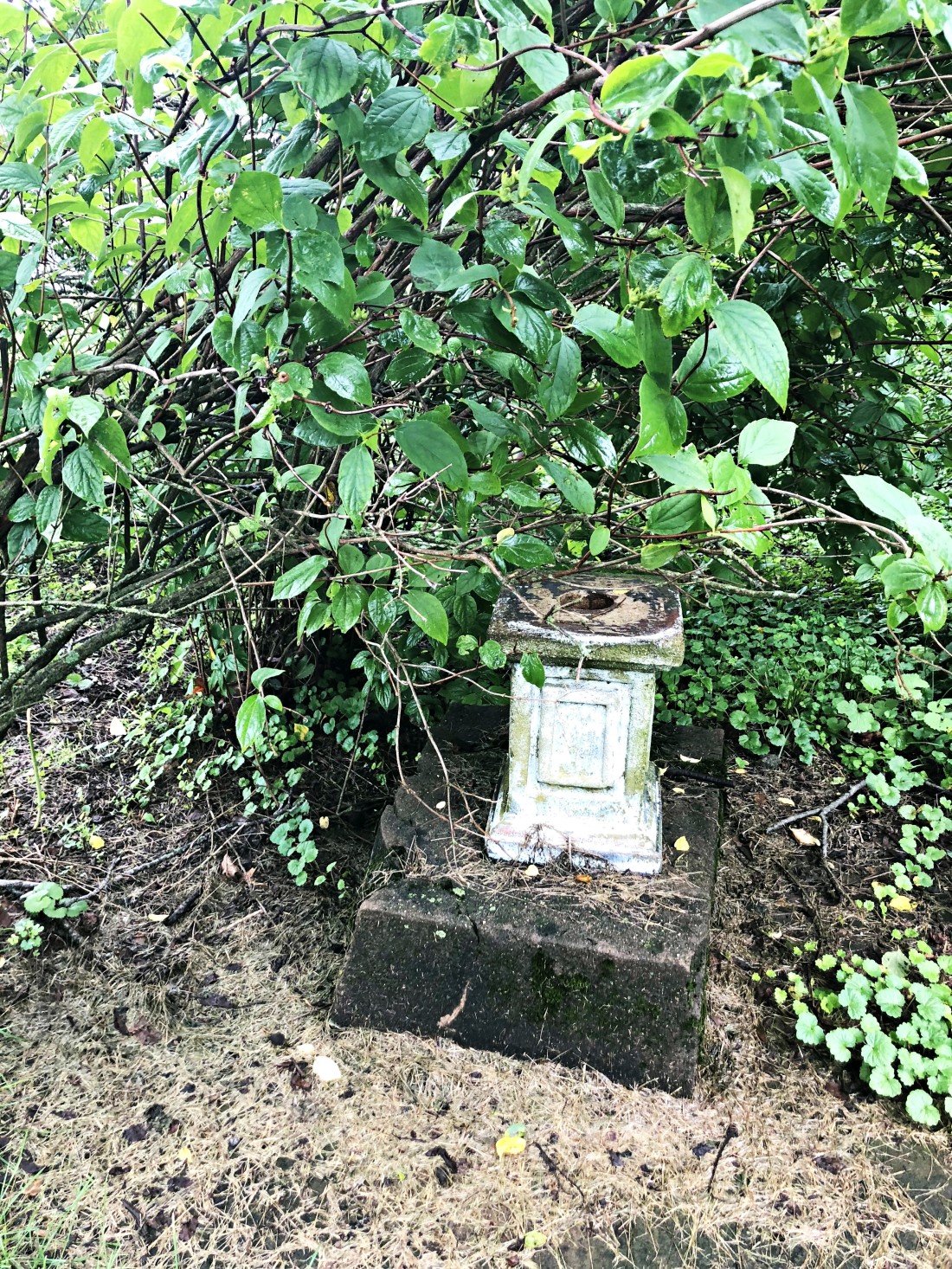 we wandered away from the house, following the stone wall to look at other parts of the property. as we went on, we found abandoned statue stands, and overgrowth. 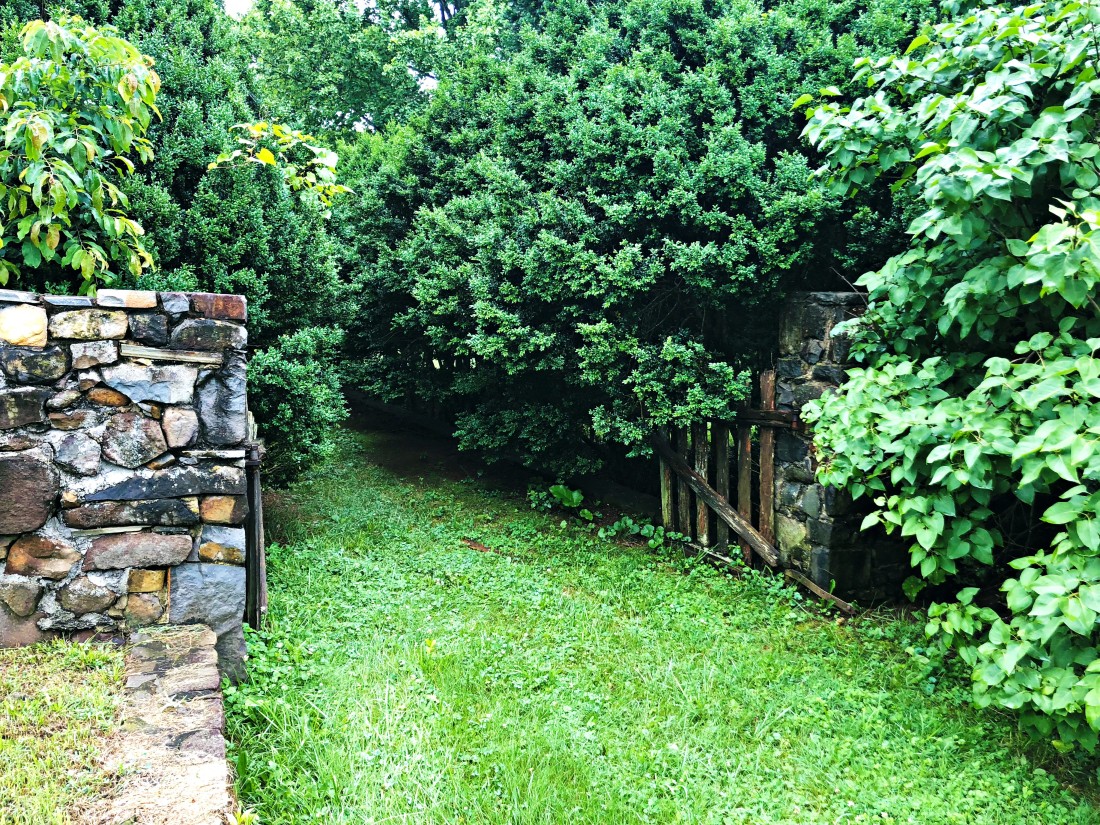 a few paces away we found a large entry way. i could already imagine the horse drawn carriages pulling through here once upon a time. the tree branches and bushes grew so much that the path was blocked, but the small wooden gate stood open, ready to welcome any new guests. 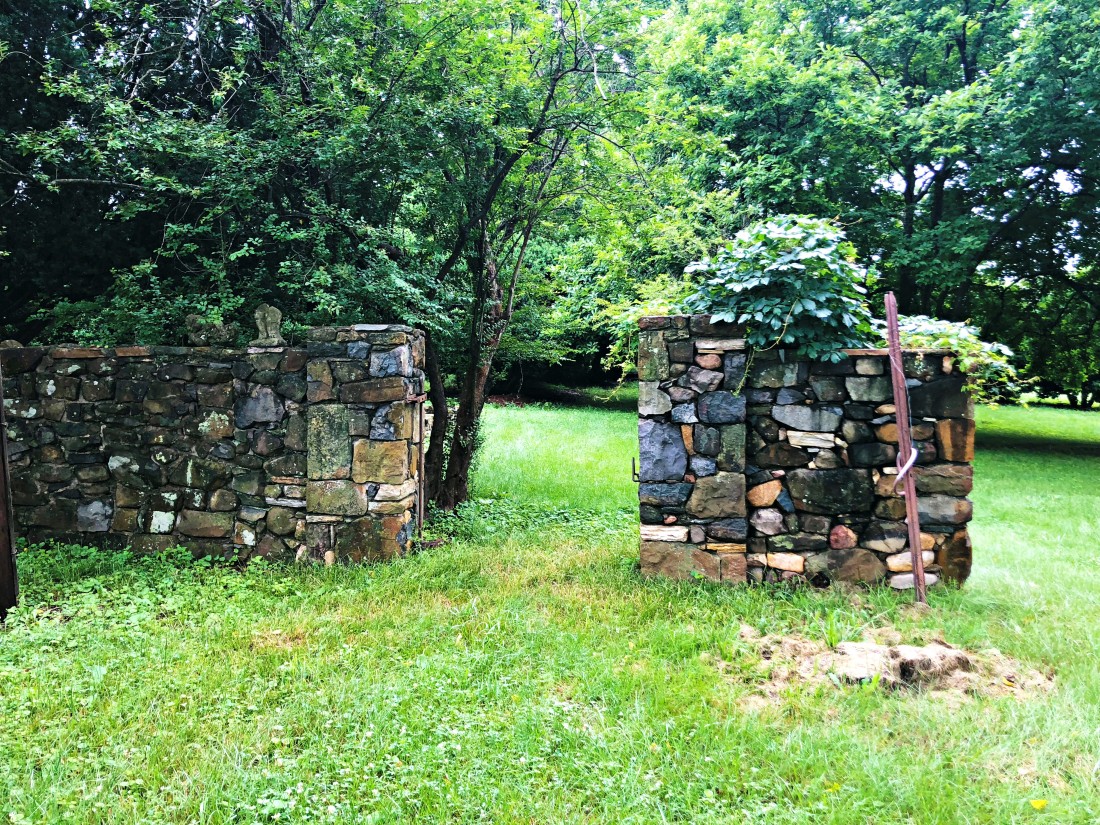 as we continued to follow the stone wall, which was almost as tall as me, we found another broken old gate. i couldn’t help but try to imagine how this must have looked during its peak. it’s hard to tell from the picture, but the stone wall is actually quite tall – taller than me. 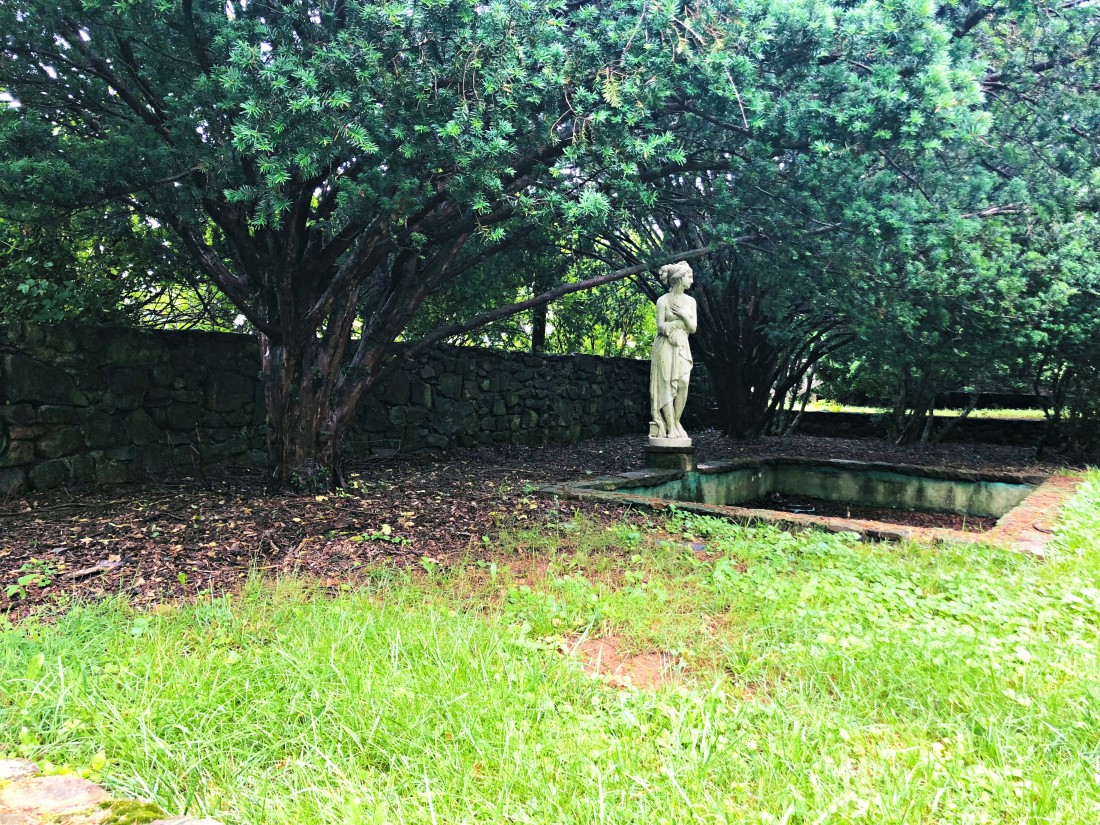 wandering through the opening, we found a fountain that had long been dried out, with a goddess watching silently over the area. 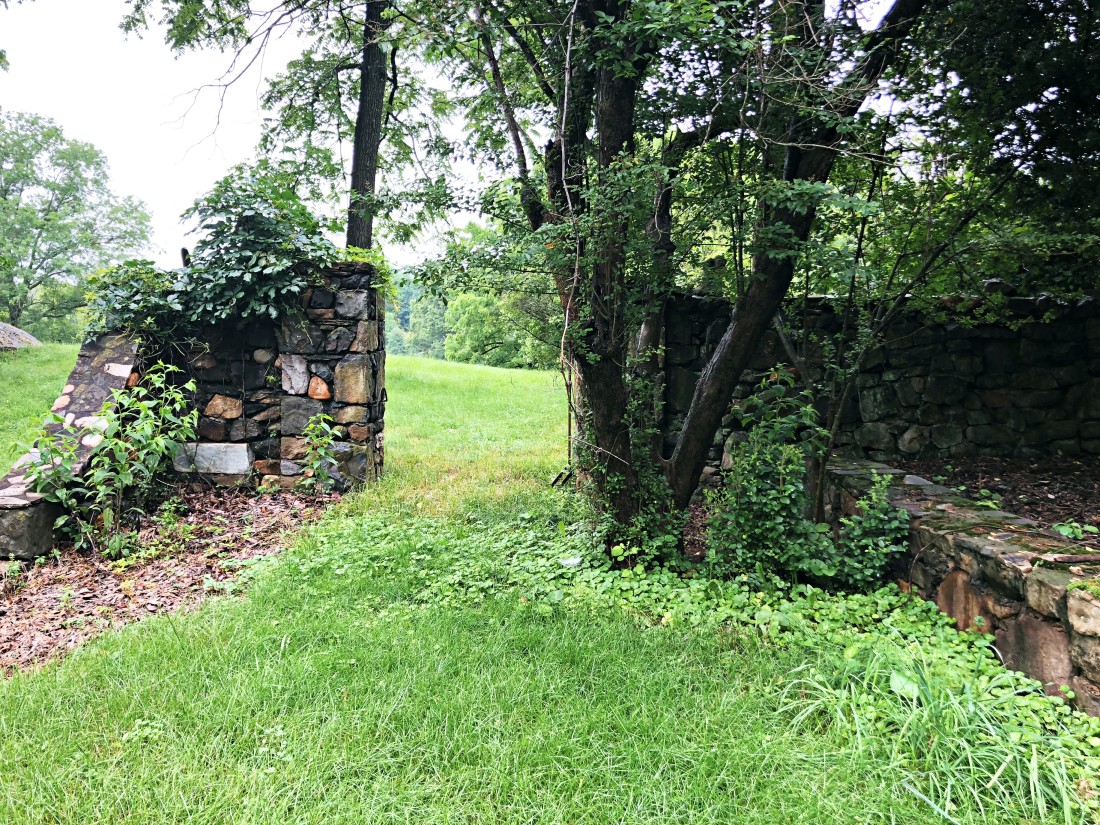 the other side of the small opening was overgrown, but still beautiful. if it has been drier out, i would have liked to sit on the stones and enjoy the aura of the area a little longer. 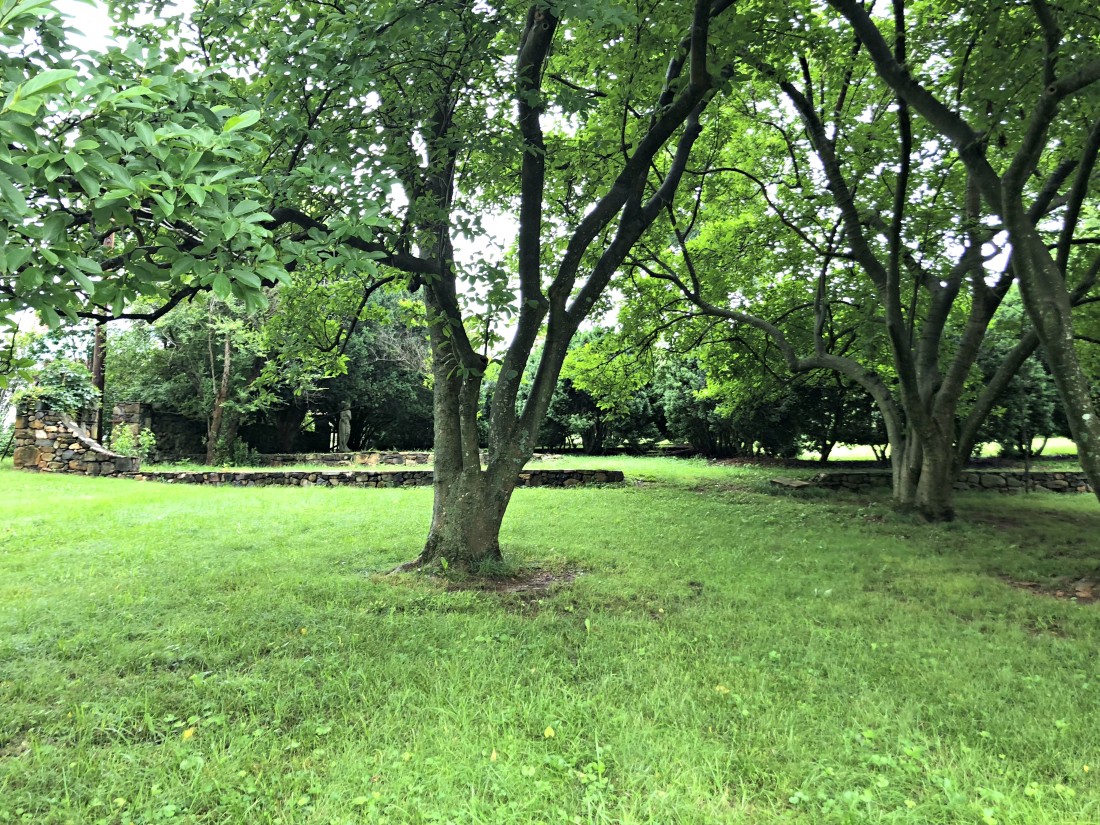 we wandered down from the fountain area, and as i looked back i saw the statue standing full of dignity under the cover of the trees. 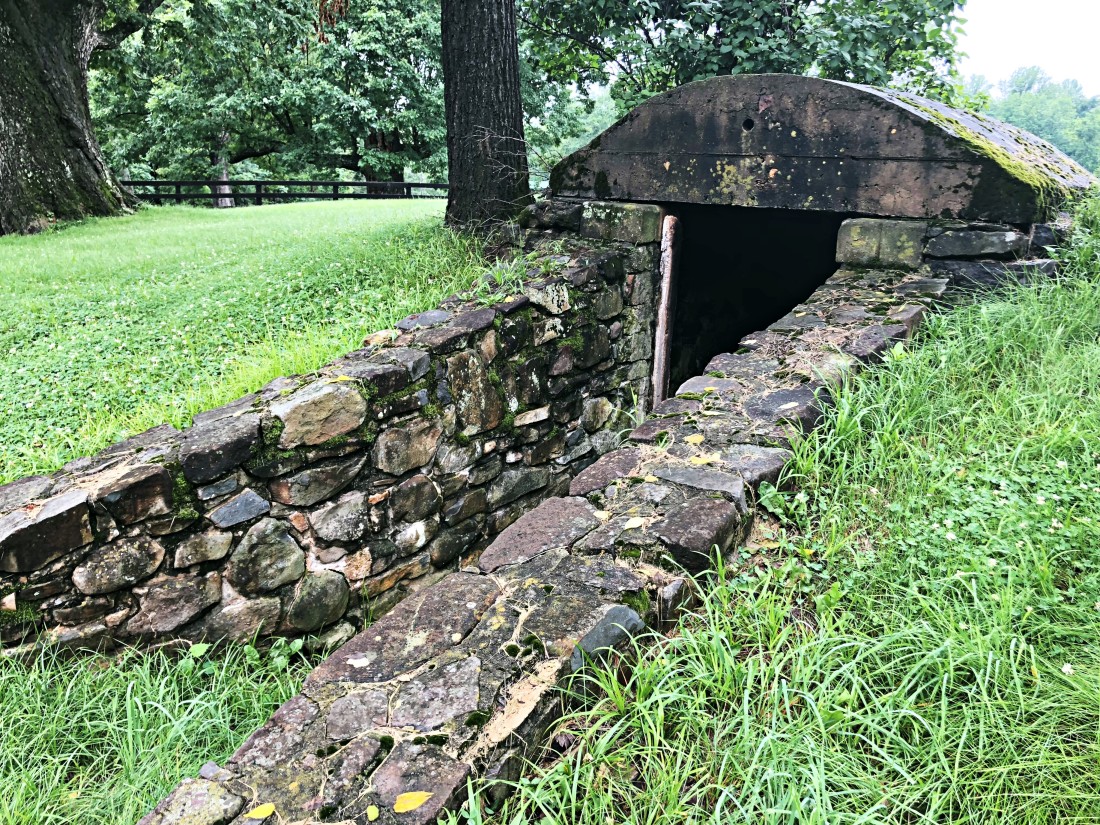 down the way we came upon the old ice house. before electricity and refrigerators, they would store huge blocks of ice here for the summer and bring in small block for the house’s ice box. i wanted to go take a closer look, but they warned me there might be snakes inside, so i kept my curiosity at bay. 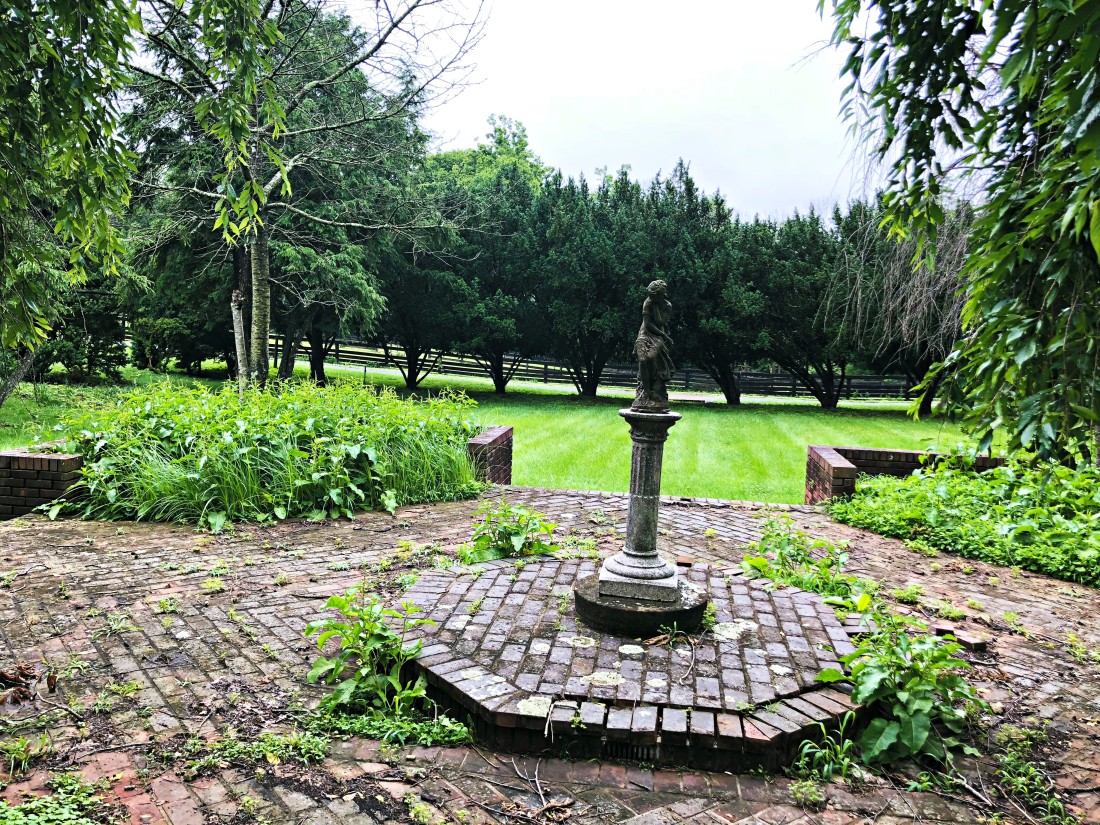 just past the ice house was another patio area, a bit further off and secluded from the rest of the house. i imagine this was a more private area to entertain guests, and where adults could relax and watch as the children ran through the open grass. 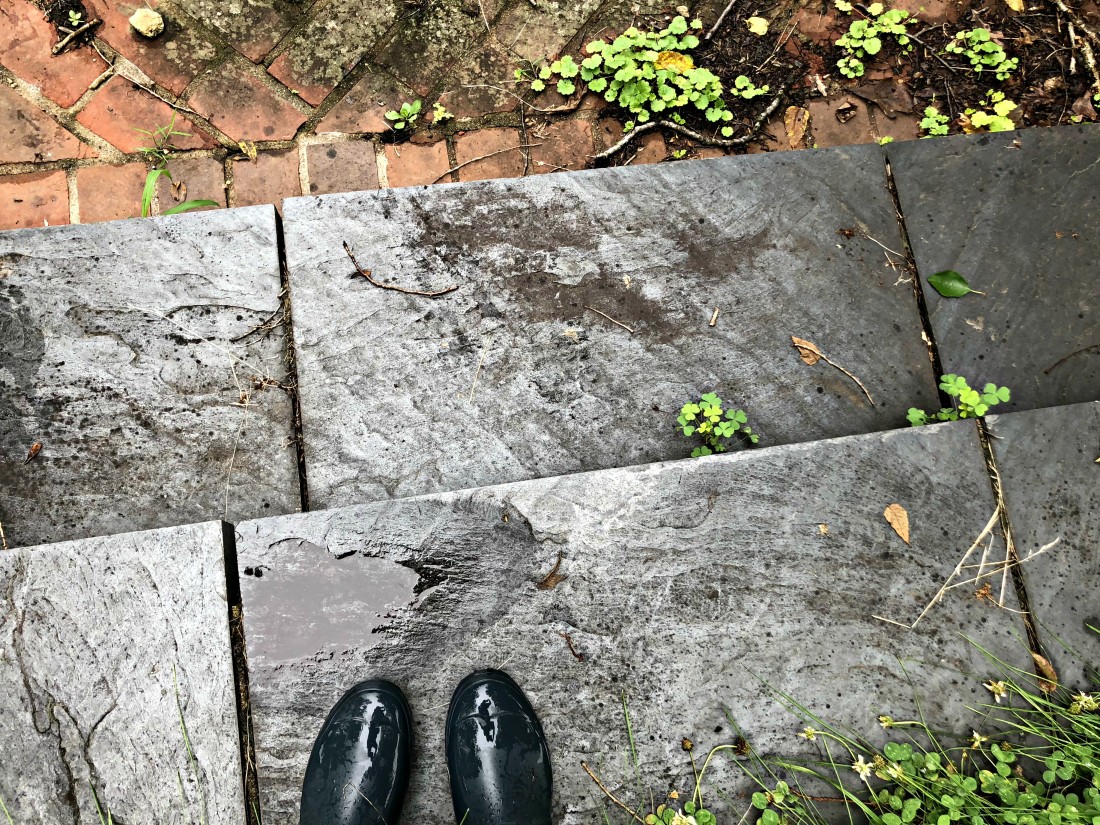 it had definitely been restored because there were modern stone slabs instead of the stone from the quarry, and the foundation was bricks. it may not have matched the rest of the property but it had its own special wonder. 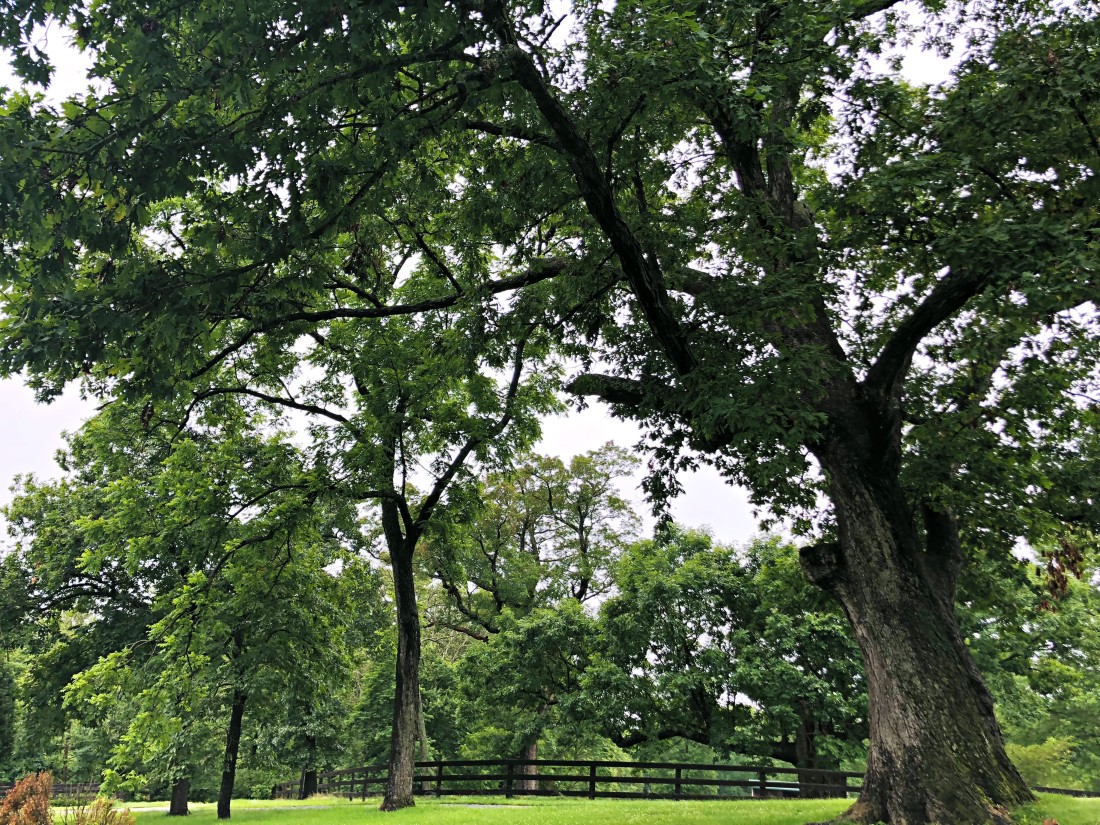 we decided to look more at the property itself instead of just the house and structures, so we followed an old trail. the trees throughout the property has such thick trunks, i could only imagine how much they’d seen and how old they are. 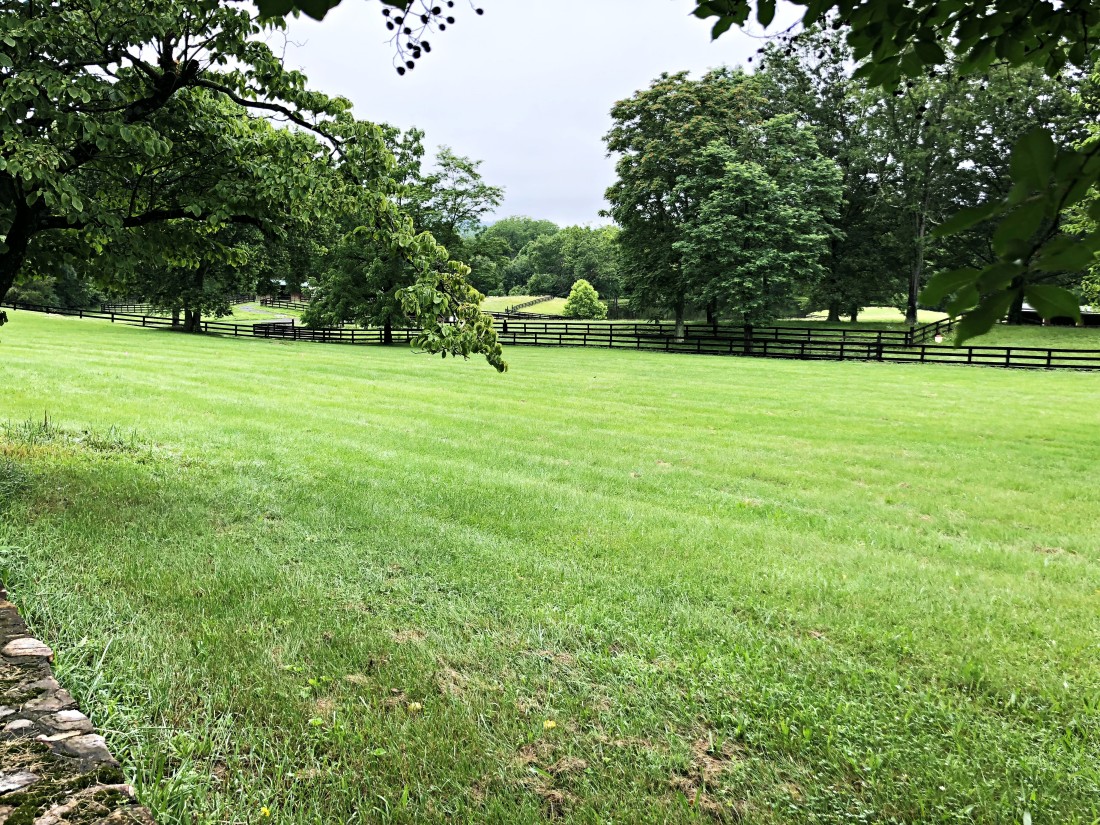 the house, as if not amazing enough, sat on sixty acres of land. the plains stretched on and on, and the strategic fencing (which i’m sure was used for farming once) cut up the stretch of grass and really accented how far the property stretched for. 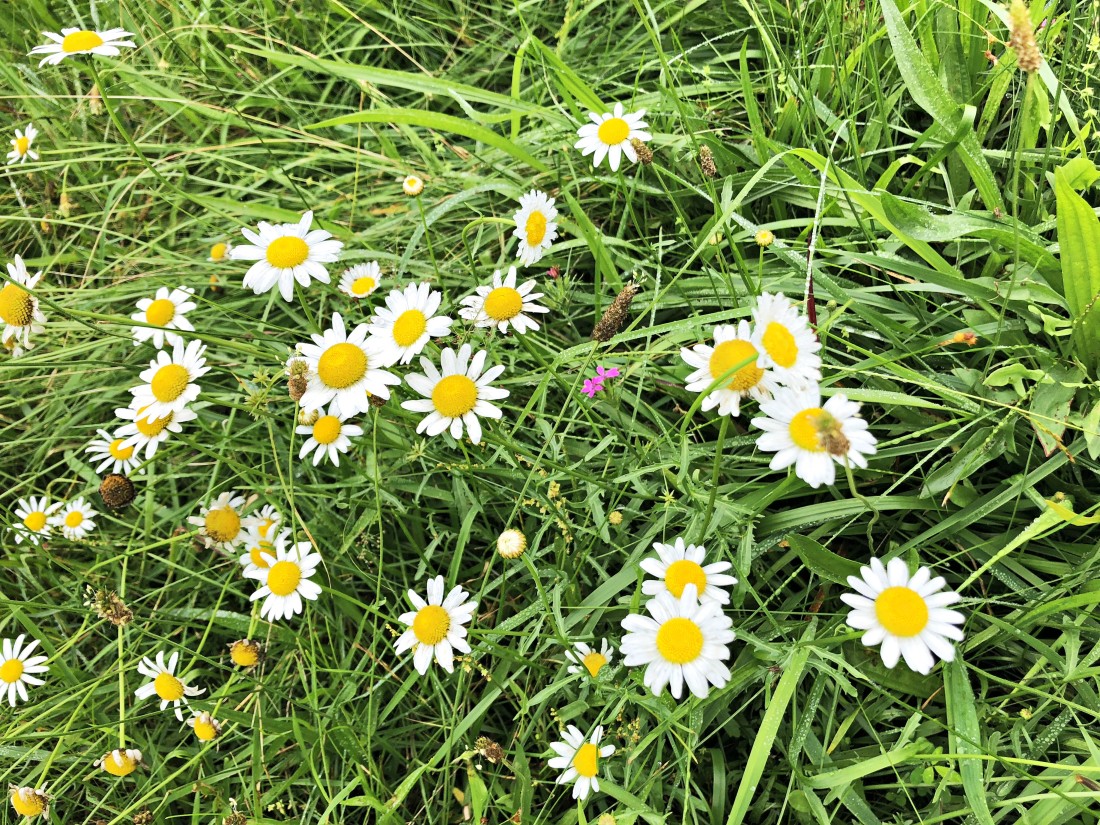 among the tall grass, there were beautiful wildflower daisies, growing as they pleased. i don’t get to see wildflowers up close too often, so this was a treat. they were so friendly and bright, just as their flower language represents: cheerfulness. 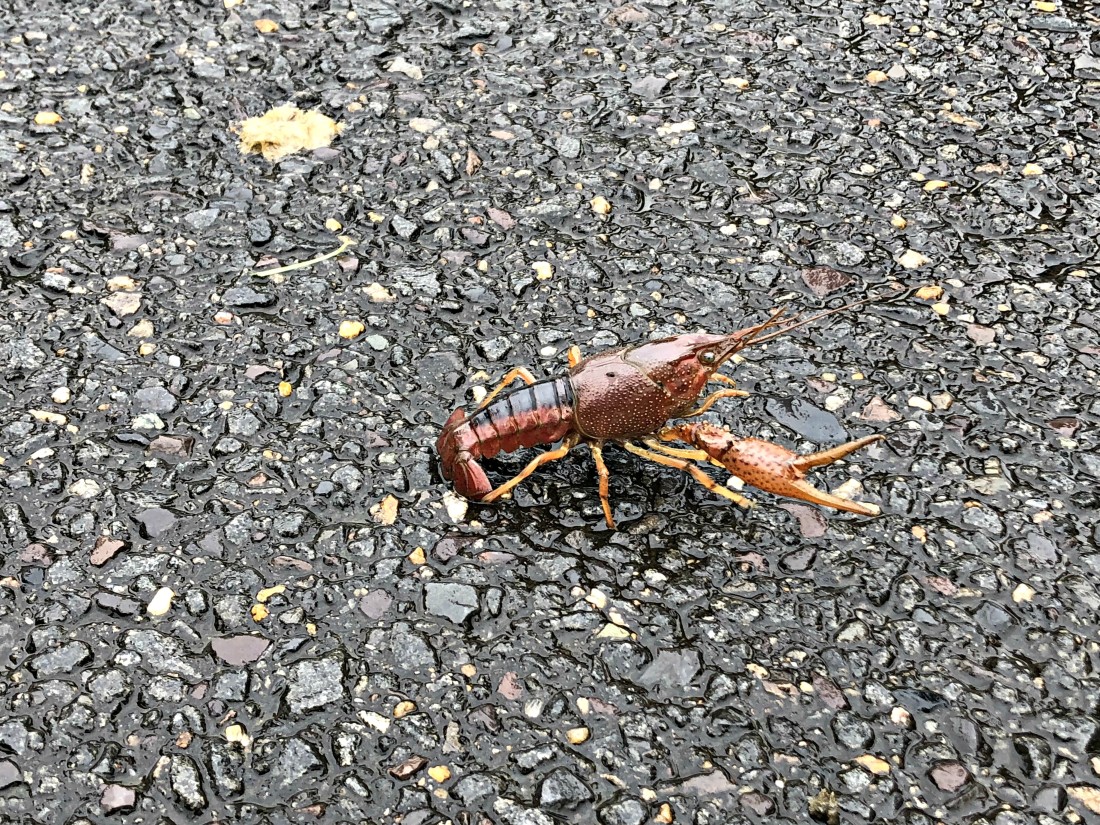 as we headed down to the pond on the property, we were surprised to find a little crayfish lost on the road. it must have been through a lot because it was quite spooked by us and was missing its left claw. i’d never seen a live one before, and the owners even said they’d never seen one on the property before. i scooped him up with some paper and took him down to the pond so he could feel safer in his natural habitat. 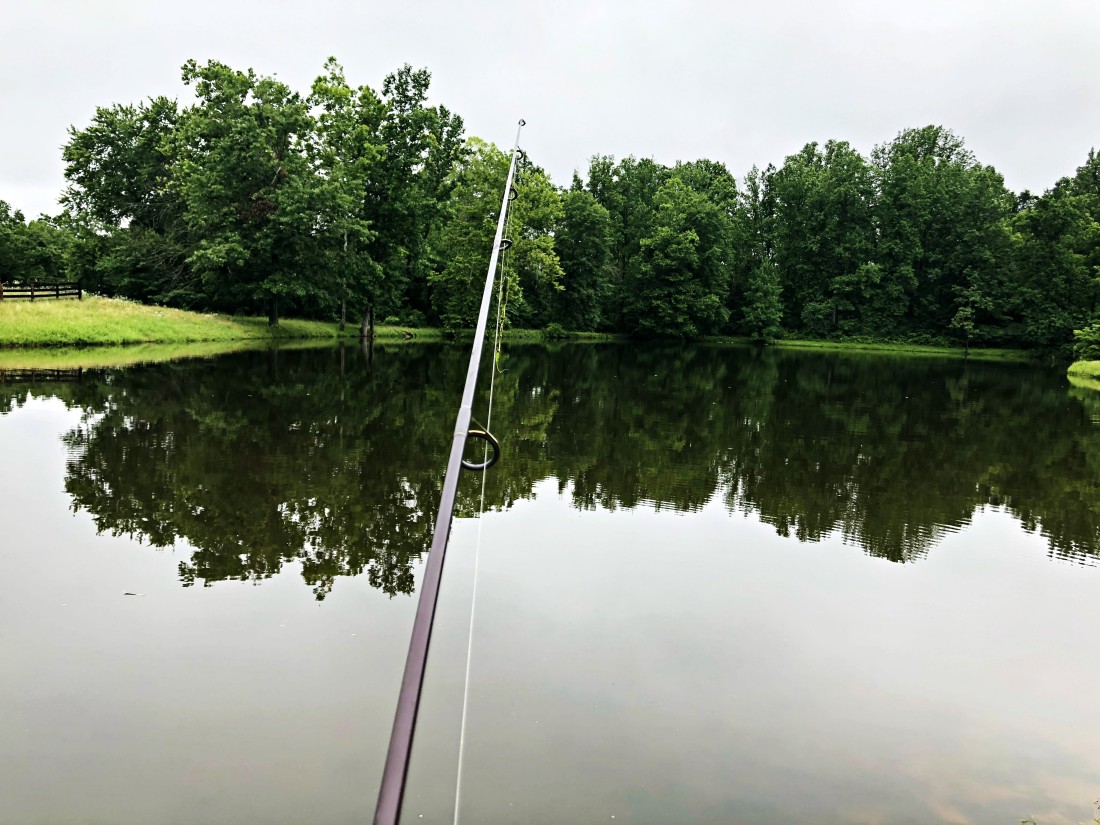 when we made it down to the pond, i got to experience fishing for the first time. we didn’t catch anything, but i was able to get a few bites and nibbles. it was a really exciting yet calming experience (if that makes any sense) and i can’t want to go fishing again. 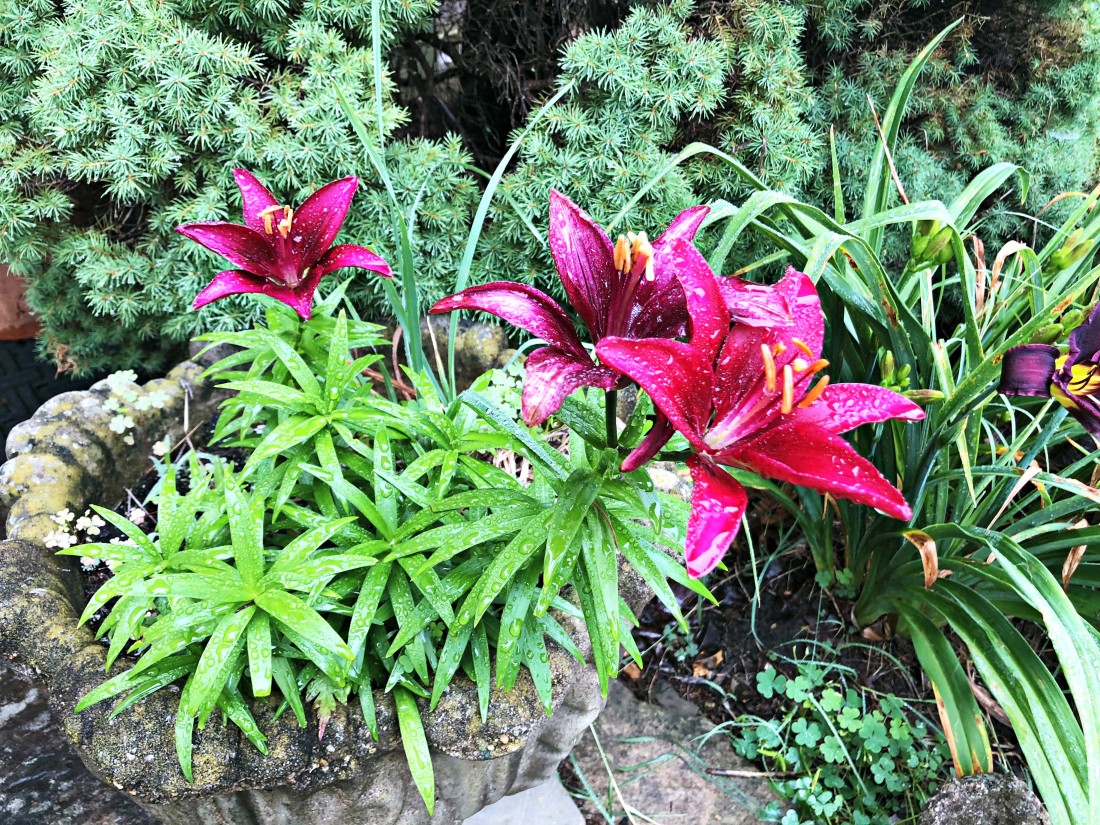 after a few hours of enjoying the property and fishing, we went back up to the house, and i noticed these beautiful flowers by the driveway. the raindrops sat so perfectly on the petals and leaves, giving such dimension to the moment. i felt they summed up my day – a little bit of rain but stunning regardless.

Love is the Tuesdays 🤍
Husband appreciation post ❤️
You’re my, my, my, my lover 🤍
In case you missed it, I’m a wife now.
It’s grape to see you ✨
I’m getting married! ✨
But who’s counting the time when we got it for life? ✨
I hope it’s you they put me in the ground by 🤍
#coolestofficeintown